Since the mid-nineteenth century the carousel industry has passed through its Golden Age, then a period of sad decline, and is now enjoying a Renaissance.  The “Golden Age of Carousels” is considered to be approximately from the years 1867 - 1930. Although there were various developments before that time, it wasn’t until then that progress in industrial technology, availability of talented immigrant labor, and public demand created the conditions for a thriving and competitive industry. ​Although thousands were built, there are fewer than 170 of these antique wooden horse carousels still operating in the United States and Canada today.  These machines include large ornate stationary or “park” machines that stayed in one place for years, and smaller portable machines.  Depending on the mechanics of the machine, the horses would be standers, jumpers, or both. A similar type machine was the “racing derby” or deck-based “roundabout.” Although the Great Depression essentially curbed the demand for new carousels, many riders still enjoyed riding and creating happy memories on the remaining carousels. 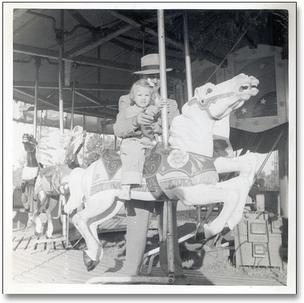 Today we differentiate between the various styles by referring to the geographic location, the company name, the carver’s name, or a combination of these. European Style animals and machines include Bayol, Bairolle, Heyn, Hubner, and English builders Spooner, Savage, and Anderson.  Early or primitive animals and machines were created by Dare, Armitage-Herschell, Norman and Evans, and United States Merry-Go-Round Company. The Philadelphia Style features the works of Gustav and William Dentzel, Daniel and Alfred Muller, and Philadelphia Toboggan Company (PTC). The Coney Island Style featured such carvers as Charles Looff, Charles Carmel, John Zalar, M.C. Illions, and Stein and Goldstein.  The primary producers of the Country Fair Style were the Herschell-Spillman and Allan Herschell Companies of New York, and the C.W. Parker Company of Kansas.

​The current Carousel Renaissance began in the early 1970’s, when the National Carousel Association, and later, the American Carousel Society, were formed.  The NCA and ACS both sponsor annual conventions, and each spring the NCA sponsors a Technical Conference where experts gather to share knowledge on how to preserve and conserve working carousels. Interest in this American folk art form has public enthusiasm and excitement growing.  Some businesses have sprung up to service and preserve these machines, and more information about history and current happenings can be learned through books available from “The Gift Horse” gift shop, and from the monthly magazine, the “Carousel News and Trader”.  The CN&T also offers a census of currently running carousels and a buyer’s guide in its April Issue each year.

​Many people have formed “friends of the carousel” groups to save, restore and maintain the carousels they love.  Carousel owners, friends groups, and now the general public are becoming educated about carousels and there is a renewed awareness of the civic value of a “living”, operating antique carousel.

The Southern Maryland Carousel Group's purpose is to generate an interest in American folk art while preserving Southern Maryland history by creating a unique facility in Southern Maryland to house a carousel and woodcarving museum and a woodcarving learning center for youth and adults.​The Carousel / Museum / Learning Center will provide a center of continuous, positive activity at its facility.  Operating virtually year-round and well into the evening during the summer months, the Complex will help ensure a continuous flow of visitors and constructive recreational intentions.

Our plan for the carousel is to have approximately 68 amenities - 48 ponies and animals, 2 chariots, and 18 rounding boards.  Since a carousel provides a natural array of themes - including horses, motion, the visual arts, music, nostalgia, and especially childhood, it will enhance other Southern Maryland activities.  Through its gift shop and annual school competitions, the project will provide an outlet for locally produced, carousel-related arts and crafts.  We also envision that each of our County schools will have their mascot represented in the carousel complex.

​When finished, the Southern Maryland Carousel and woodcarving museum will be the only one of its kind in Maryland!  The planned 10,000 to 12,000 square foot facility will feature many amenities, including a hand-carved mix of new carousel animals, ponies, chariots, rounding boards and mirrors.   Also there will be a fully functional band organ, a gift shop, and a special events room.  An exciting aspect to the facility will be the woodcarving museum and planned learning center designed to provide a center for continuous, positive activity year-round in the Southern Maryland area.

​Beautiful landscaping will enhance the carousel building and will compliment the park setting.