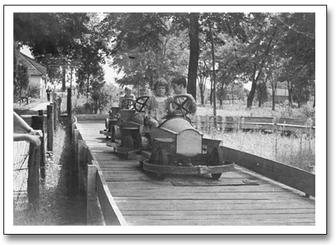 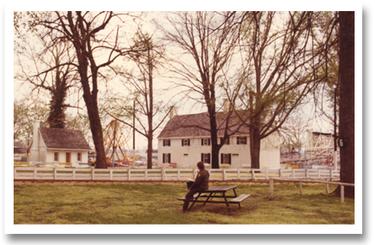 In the beginning Marshall Hall in Charles County, Maryland, was once a quiet, privately owned estate across the Potomac River from Mount Vernon, the home of George Washington.  Owned by the Marshall family, it remained in private hands until 1884.  After that time, it was sold to new owners for commercial ventures.  In 1889, the Mount Vernon and Marshall Hall Steamboat Company purchased the complex of buildings and 377 acres.  They developed the property as a pleasure resort with croquet greens, a pavilion, arcades, and jousting, the Maryland state sport. The steamboat company offered cruises to both Mount Vernon and Marshall Hall.  Eventually, Marshall Hall became a tourist attraction with the construction of a small, Victorian amusement park. As the park was modernized in the 1960’s, many of the pre-Civil War structures were demolished.

For many years, the Wilson Line boats continued to deliver their happy cargo to Marshall Hall. Hundreds of other amusement seekers would arrive by car, traveling the two-lane road down to the park beside the river. The amusement park was a family place.  With picnics, crab feasts, and miniature golf, it provided entertainment for all ages.  One very popular event was the fireworks display every Fourth of July.  Kids were thrilled when they would stop at the top of the Ferris wheel to catch a glimpse of the fireworks on the other side of the park.

People have a variety of memories of Marshall Hall Park.  For some, it was the fascination of a modern, for its time, amusement park so nearby.  Some of the young amusement park workers, mostly 14 to 16 years old, but some starting as young as 10, remember the camaraderie and excitement.  As one former worker also explained, it was his introduction to the diversity of other cultures.   Some of the workers were Cajun, and Gypsies eventually took charge of the gaming tables.  When the integration movement began, there were more African-American visitors to the amusement park. 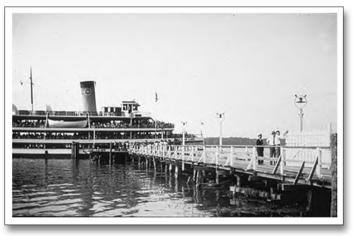 Little did anyone imagine that Marshall Hall Park would become such a popular attraction and southern Maryland landmark.  Generations of amusement park workers and visitors fondly recall their days working and playing at the amusement park.  Marshall Hall employees became like a family, each helping out the others with their duties during the busiest times, like Saturday nights when the boat would dock and the crowds would begin to stream into the park.  An employee would always be sent to the dock for a “boat count.” Sometimes the boat count would be as high as 2,300 people on board, all anxious to spend a fun-filled day at the amusement park.  An announcement would go out over the loud speaker informing the park workers of the count.  They would scurry to prepare the food in the two foods courts and to get the ticket booths and the rides ready.