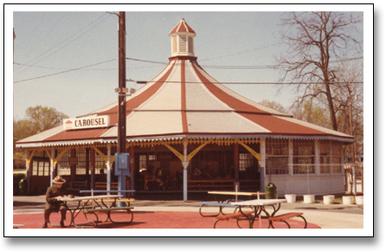 Another reason for the popularity of the carousel may have been its location in the park.  It was one of the closest rides to the  boat ramp, so it was the last one the public would see on their way out.  The carousel also was the last ride to close down each night around 11:00 PM.

The once-popular carousel was the only attraction that remained when the amusement park facilities were razed in 1981, following the purchase of Marshall Hall by the Department of the Interior.  Later the carousel, too, was dis-asembled, and its parts were scattered.  Some of the horses and other animals were saved and are now privately owned by museums and carousel enthusiasts.

THE CAROUSEL AT MARSHALL HALL

One of the most delightful rides in the park was the old-time carousel.  The carousel animals were carved by Charles Carmel (1865-1931).  Carmel was one of the many carvers with factories in  Brooklyn, New York, who carved Coney Island-style horses.  Carmel carousel animals are highly decorated, and noticeable Carmel traits include elaborate "fish scale" blankets, gorgeous armored horses, and the lolling tongue on many of his horses.  A carousel manufacturer, M. D. Borelli, built the carousel base and influenced the placement of jewels on Carmel's figures.

Many people treasure memories of the brightly painted and bejeweled horses and other carousel figures, the lights, the mirrors, and the music from the band organ on the Marshall Hall carousel.  As one gentleman put it, “Who doesn’t love a carousel?”  Love was often the theme for the carousel. If a couple rode the carousel together, they were considered to be serious about each other.  As an added attraction, the carousel featured a “brass ring” device.  When the carousel started moving, the device would feed metal rings from a dispenser, but only one brass ring per ride that won the bearer a prize, usually another carousel ride.  Though most people vied to ride the horses that moved up and down, others wanted to be on the outside standing row to reach for the brass ring. 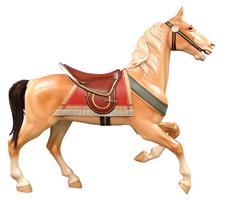 The Carousel at Marshall Hall