Sunday’s fashion show, aside from raising money, was to bring awareness to the carousel group and what it has been doing for several years. Lisa Case, owner of The Carousel clothing store, said when the store opened some 34 years ago, it had been her and her mother’s hobby to collect all things with a carousel theme. She said she bumped into Boggs at a recent county fair and learned all about the carousel group. From that encounter, she said she wanted to get involved and help others become aware of what the group is doing. Currently, Case sells carousel group shirts at her store and has one of the carousel animals displayed there. Putting on a fashion show, Case said, brought the two carousel names together for a good cause, combining two things, “love for carousels and the community,” she said.

Some 50 local students modeled clothes from the store from specialized gowns to everyday clothes and school uniforms. Two hundred community members came out for the show.

“I hadn’t heard of the [Southern Maryland Carousel Group] until they asked for models,” Kimberly Tutz of Hughesville said Sunday. Tutz had three children participate in the fashion show, and she said she enjoyed getting an opportunity to see some of the handcrafted carousel animals. The final project, when it comes together, will be wonderful, she said, adding that carousels are “so nostalgic.” Having them be handcrafted by local woodcarvers, she said, “gives them that hometown feel.”

Aside from the fashion show, the two carousel theme groups had a carousel coloring contest for children and raffled off a carousel-related gift. 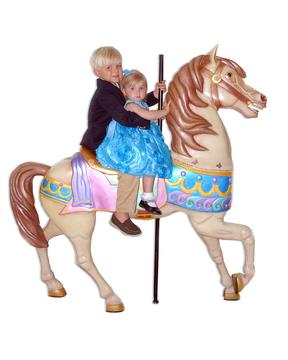 by Gretchen Phillips, Staff Writer For The Maryland Independent

A carousel-themed clothing store is helping a real carousel come to life.

The Carousel, a clothing company in Waldorf, showcased many of its children’s clothing selections during a fashion show Sunday. Proceeds of the event went to the Southern Maryland Carousel Group, comprised of local woodcarvers who have been working for several years to create a handcrafted carousel in Charles County and a wood-carving museum. According to literature from the group, the purpose of the project, which began in 2004, is to generate an interest in American folk art and preserve Southern Maryland history.

Burkey Boggs, president of the carousel group, said Sunday’s fashion show was the first major fundraiser the Waldorf store has been a part of. He said he was glad that the first event involved so many children because children are the ones who will get the most joy out of the carousel once it is finished. When completed, Boggs told the crowd Sunday, the carousel will have 48 animals. To date, 40 have been completed and three are in the works. Each animal for the carousel is handcrafted out of wood and then painted by local artists in the tri-county area, Boggs said.