Members of the National Carousel Association gathered at the La Plata Volunteer Fire Department on Thursday evening for a crab feast hosted by the Southern Maryland Carousel Group and the Charles County Arts Alliance. Association members traveled by bus from Washington D.C., where they were meeting for their annual convention.  Participants also enjoyed the hand-carved carousel animals and memorabilia on display at the firehouse.

"Santa Bob" was on hand Thursday evening to serve crabs to members of the National Carousel Association who had traveled by bus from Washington, DC., to see the hand-caved carousel animals created by the Southern Maryland Carousel Group on display at the La Plata Volunteer Fire Department. Among the celebrities attending Thursday's Southern Maryland Carousel Group dinner was Barbara Fahs Charles, a co-founder of the National Carousel Association who published the first national photographic survey of carousels in 1971.  Charles became interested in carousels in the late 1960's when she lived in an apartment above the Santa Monica pier carousel that was featured in the movie "The Sting."  "I found that carousels were a great (photography) subject because they moved, they had action, they had kids, they had detail," Charles said.  "But if you blew it totally, you could go back the next week."

Board of Charles County Commissioners' President Reuben B. Collins II (D), stopped by the La Plata Volunteer Fire Department Thursday evening to chat with Southern Maryland Carousel Group members including President, Burkey W. Boggs.  "I think (Boggs') vision is good," Collins said.  "I think it's the type of thing that would be a benefit to our community.  I've always been supportive of what he's trying to do."

Hand-carved miniature carousel animals were auctioned off Thursday evening to help raise funds for the Southern Maryland Carousel Group's efforts to erect a carousel in the region.  Each miniature is a replica of one of the full-size animals carved by the group's members. 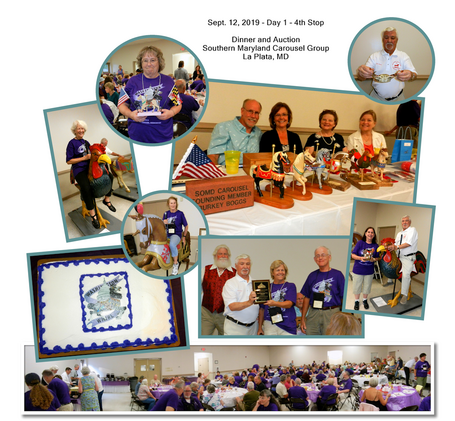 August 11, 2017 | Carousel Conversation Goes Round and Round